Here are some links to various small games and experiments I've made and put up on the net over the years: 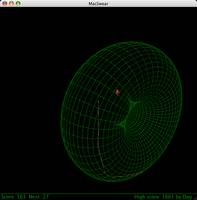 MacSwear is a better native port of Swear for Mac OS X. It uses OpenGL and a Cocoa GUI. It runs much smoother than the Allegro-based version of Swear, and it has some small graphical improvements.

The source is provided, and while the GUI part of it is heavily OS X-centric, the game part is written in plain C++ and OpenGL, and should be quite portable. I would very much like to see the game ported to other platforms, so I would be very grateful if somebody did this for me!

MilkSnake is an updated version of this same basic game, but with much improved graphics, and with music and sounds! 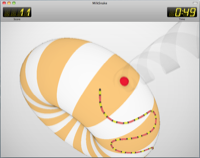 MilkSnake is a new take on the classical snake game. It is played on the surface of various 3D shapes, such as a sphere, a torus and even a Möbius strip.

It has its own homepage:

Speed! is a simple first-person game where the goal is to race through a maze as fast as possible.

Speed! is a port an old Amiga game. It features the original's graphics, gameplay and music. It runs on Mac OS X, Windows, Linux and the Nintendo DS. It can probably be made to work on many other platforms fairly easily, too. 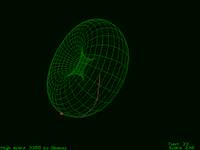